ALICE IN NEW YORK: A REVIEW BY AUSTIN ENGLISH 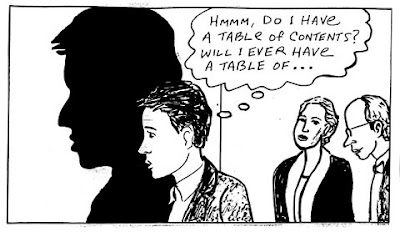 Here is a blast from the past. This is a review of my comics series, ALICE IN NEW YORK. Among the number of reviews, I think I like this one best. Thanks to the wonders of the internet, this review is safe and sound forever and documents my comic having already circulated by the time of this review, August 17, 2005.

The review is from the Dogsbody column by Austin English for The Comics Journal.

Henry Chamberlain has an appealing drawing style: very loose, but with weight. Chamberlain knows when to bear down on the pen he's using; he knows the difference between too thick and too light. The line in his Alice in New York series is just right. Alice in New York is a very functionally drawn comic, but not so functional that it kills any potential poetry of drawing, the aesthetic thought given to visual appeal. Chamberlain's figures are rudimentary and quickly drawn, serving to convey information and move the story along, but they still look like they were drawn by a human being who likes drawing. If there's one aesthetic idea I want to champion in this column -- and readers who send minicomics into Dogsbody should take note of this before sending in more soulless, animation-ready pamphlets full of sadness and regret for being alive -- it's that I favor unique, living drawing. I want to say less-than-perfect drawing, but then people will think I mean ugly, raggedy drawing. Not true: I like drawing that feels likes it's being thought out as it's being drawn.

That's a rarely discussed aspect of cartooning that I think is important and very beautiful. E.C. Segar could draw circles around anyone, but looking at some of his panels makes you feel like that flawlessly rendered background character was added in at the last second, on a whim, because the panel needed some drawing that suggested the joy of drawing. Cartooning, for me, is not an exact science ("let us convey information with words and pictures and not let anything distract us from our goal"). There's something about drawing iconic figures over and over again where the quicker that figure is drawn, the more beautiful it becomes. The more and more abstract the drawing becomes, the more unique. Cartooning, unlike painting, is often done fast, and I love cartooning that looks like it was drawn fast and on the fly. Art that was made on the fly is a thrill unlike the thrills provided by art that has been mulled over. Looking at Krazy Kat is like watching a movie; I think it's because it was being drawn at the speed of thought. Let's invent a new cartooning school and call it the SOT (Speed of Thought) movement. Tell James Sturm to hire someone to teach about this at that new crazy school he's building. But remember: It's not "quick" drawing I'm advocating here. It's "beautiful quick" drawing.

Chamberlain is not the best example of the SOT movement, but I like his work because of the qualities that all SOT followers contain: interesting art that's unique because it comes from the specific hand movements of the person drawing it -- it can't be duplicated ever ever ever. I love looking at Alice in New York because my eye never gets bored. I have no idea what strange kind of character arrangement Chamberlain will use next. He's adventurous in his cartooning. He's not settled into his drawing style yet, so he's trying it all out: different "camera" angles (I hate that camera analogy though... no one ever use it again after this sentence), diverse character poses, etc. He rushes some stuff, which drives me nuts, but when he doesn't rush, he's sublime: I love the drawing of the central character thinking, "Will I ever have a table of contents..." with a big shadow next to him and two beautifully drawn figures right behind him. That drawing came out of Chamberlain's drawing hand, and not his brain.

I should say that there is a lot of lousy drawing in here too, but the good stuff is good enough that I want to recommend it. People might pick this up and say "Well, what about this long sequence of boring drawings?" Yes, they're there, but I'm gonna let the cop-out slide this time.

However: the writing in Alice in New York is nowhere near the level of poetry that the drawing is at. The dialogue is often a bit stilted and bizarre. It's also a tad self-important, with lots and lots of stuff like this: "What are you looking for?" "A purpose." Or this: "Need anything?" "Direction. Where do I go?" Alice in New York is almost 90% this kind of writing. It's frustrating, because the other 10% contains some interesting dialogue (I liked the line "Did you graduate high school?" "I'm 25.") and shows some smarts. The other thing is, Chamberlain's drawings write very well. Comics storytelling is hard to do, and Chamberlain's drawings can tell a story, but he suffers from what so many cartoonists can't seem to win a losing battle against: telling stories with a minimal amount of conflict, only a slight flair for dialogue, and sketches of characters' personality. Less than sketches.

Here's what I propose to Chamberlain, and to an entire generation of young cartoonists: Stop going to art school, and instead go to a creative-writing program for your college education. You can all draw -- we have five billion great illustrators in the world -- but if you want to be a cartoonist, doesn't that also imply that you want to write? Why do so many cartoonists decide that writing comes naturally to them, so naturally that they don't need to work on it? That's like a pitcher in baseball not understanding why he bats 9th! "I can pitch so well... isn't hitting the same thing? Shouldn't my pitching skills guarantee that I can hit?" The thing is, most pitchers don't want to hit (they despise it!), but many cartoonists want to write. Chamberlain most definitely wants to write. There's a story in Alice in New York that he wants to tell, and he tells some parts of it well, but the bulk of it seems a tad forced. I wish that Chamberlain's flair for creating inspired, honest, unique drawings extended to his writing. I think he can make them match up. In the meantime, there are some panels in Alice in New York that are really worth a look. I'm sure there will be a lot more of those panels in the future. This comic is a chunk of an in-progress graphic novel. I want Chamberlain to finish this graphic novel, but fix the problems in it before he does, because his art is worth that time.

(This costs $3. You can see more of Chamberlain's work at his website, or e-mail him for more information.)
Posted by Henry Chamberlain at 1:28 PM