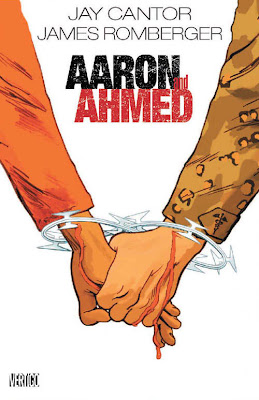 It would be an honor to meet Jay Cantor or James Romberger. I think there's a lot of good things going on in their collaboration, the new graphic novel, "Aaron and Ahmed." However, it doesn't quite come together as well as it should. For some reason, the luck of the draw (no pun intended), or some quirk in the timing, leaves Romberger's art feeling too cold and rushed. Oddly enough, the same can be said for Cantor's treatment of this script. You can read my full review over at GeekWeek. In the end, I still recommend the book but it's just not quite where it could be and I think that's partly due to time constraints and page count constraints. I say this because I sense that Romberger is following a certain muse and when his style clicks, it really clicks. You can see that in THE BRONX KILL, which I also happen to review at GeekWeek. I think he just had a lot more time to allow things to come together.
Posted by Henry Chamberlain at 1:38 PM